Encases the holder in amber

Original treatise from Naturalis Historia describing the process by which amber goes from a liquid to a solid.

Handling the scroll results in instantaneous encasement in solid amber. 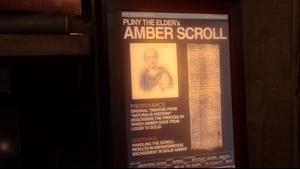 In "The Ones You Love", Artie sent the scroll to Joshua to distract Claudia.

In "A Faire to Remember", Artie used the scroll to temporarily immobilize Myka while she was under the effects of Frances Farmer's Music Box. However, the amber shell wouldn't restrain her for long because of her telekinetic outbursts.

Gaius Plinius Secundus, better known as Pliny the Elder, was a Roman author, naturalist, and natural philosopher as well as naval and army commander of the early Roman Empire. He spent most of his spare time studying, writing or investigating natural and geographic phenomena in the field. He wrote an encyclopedia called Naturalis Historia which is Latin for Natural History. Naturalis Historia became the basis for the writings of many other philosophers after him. Pliny theorized that amber was once in a liquid state before it was in a solid state and he came to this conclusion from studying insects that had been encased in amber. 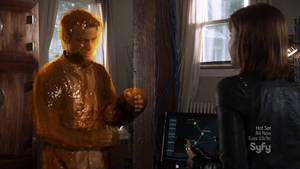