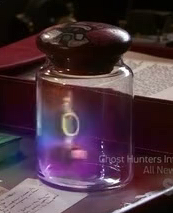 Used by P.T. Barnum to increase the shock of the crowd by regrowing the limbs and internal organs of his "freaks". However, if the extra body part isn't amputated, it'll keep growing till it bursts.

Artie used this artifact to repeatedly grow his appendix back in order to lure the Warehouse doctor, Vanessa Calder, that Artie had a crush to the Warehouse to remove it. However, the last time Artie used this artifact Vanessa was called away to treat a Regent for tungsten poisoning before she had time to remove Artie's appendix again. Artie's appendix continued to grow and would've eventually bursted if Pete hadn't rushed Artie to the office of local veterinarian Kelly Hernandez who was able to perform an emergency appendectomy and save Artie's life.

Phineas Taylor Barnum was an American showman (and conman) in the 1840's. He employed sensational forms of presentation and publicity to popularize amusements like the public museum, the musical concert, and the three-ring circus. He made the circus a gigantic and popular spectacle declaring it "the greatest show on Earth".

Retrieved from "https://warehouse13.fandom.com/wiki/P.T._Barnum%27s_Top?oldid=45620"
Community content is available under CC-BY-SA unless otherwise noted.