Neutralizer, also known as "the purple stuff" and "goo," appears in various episodes as a glowing, purple liquid with an apparently high viscosity. It is created in the area of the Warehouse nicknamed "the Gooery" and helps render overly active artifacts temporarily inert.

The exact origins of Neutralizer are never explained and, as such, are unknown. However, Warehouse 9 was known to safely collect artifacts too dangerous for human contact (if not most or all artifacts in general) through the use of a giant purple swamphen. As such, it is possible that modern Neutralizer originates from, or is at least based on, the giant purple swamphen.

In the crossover episode "Crossing Over", the Eureka-based scientific institution Global Dynamics provided the Warehouse with an upgraded formula of Neutralizer created using alkalizing agents in 2010.

Exactly how neutralizer functions is unknown, but it does cause any artifacts or anything that affects artifacts to be neutralized.[1] When reacting with an artifact a burst of electricity can be seen. It can be assumed that neutralizer also neutralizes any electric charge an artifact may have.

As revealed in "Crossing Over", Neutralizer's usefulness is not limited to artifacts alone; Trevor Grant, having traveled through time from 1947 to 2010, was creating a temporal wormhole due to the two time periods being pulled together by his unstable molecules. He was injected with upgraded Neutralizer in an attempt to stabilize them and prevent further temporal distortions; in the end, specialized nanites purged the exotic particles from Grant's body, but it is uncertain whether the Neutralizer had any real effect or helped in the process.

Besides stabilizing and rendering artifacts and molecules inert/stable, Neutralizer seems to have a euphoric effect when exposed to living organisms; in Magnetism, when Artie was forced to douse Pete and Myka in Neutralizer to prevent their intensifying negative energies from agitating nearby artifacts, the two agents instantly ceased their fighting and burst into laughter and playful behavior (why this seems to only occur when exposed to the skin and not injected is unclear). From this, it could be assumed that Neutralizer may act as a positive/positively charged force against the negative/negatively charged force of artifacts, if not such force in general, in a literal and/or emotional sense.

Warehouse agents have used neutralizer both in the Warehouse and out in the field. It is a vital tool for artifact hunting as it neutralizes the effects of an artifact.

In "Second Chance", as a shard of Spartan Armor was lodged inside of Cody Bell's chest and could not be safely removed, Neutralizer was injected directly into his bloodstream to reverse the shard's effects. In "Crossing Over", Trevor Grant was given doses of Neutralizer to stabilize his molecules and keep him from ripping a wormhole between 2010 and 1947.

When Neutralizer is used and renders an artifact inert, it gains a particularly foul smell, described as "when something bad goes bad."

Ear plugs used to protect against artifact-produced or enhanced sound 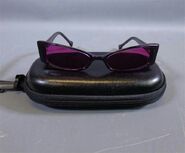 A machine for intense neutralization, useful for neutralizing psychically triggered artifacts by getting into its pores

Neutralizer sprinklers used to remotely neutralize artifacts from the main office, controlled by a device for inputting coordinates

There are certain occasions, in which an artifact cannot be neutralized. 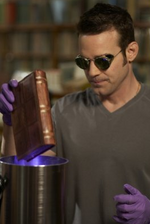 One reason is that the artifact is a bifurcated artifact (two or more parts). For example, Edgar Allan Poe’s Quill Pen and Notebook. In this case the neutralizer will be ineffective and the two parts of the artifact need to be brought together. 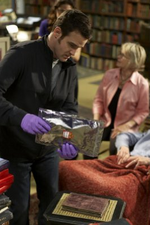 Temporary external exposure to both active or spent Neutralizer by humans appears to be otherwise harmless, even when large quantities are applied.[2] If ingested, however, Neutralizer will cause hallucinations.[1]

Contrary to this, it has been shown twice that if injected into the bloodstream of a person, there are no side-effects (at least none shown on-screen). However, as both instances involved the upgraded formula provided by Global Dynamics, it's likely that this toxicity was removed.