Cures dieases. Transmutes diseases and injuries to another person holding the knife.

Cures diseases or injuries in one person by transferring them to another person when both hold the knife simultaneously. 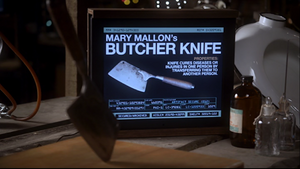 It was supposed to be obtained quietly at an auction house in Boston by Claudia and Steve, but a man named Owen Larson, posing as a janitor, stole it first. Mr. Larson used it to transfer his son's leukemia to himself. The artifact is currently in the Warehouse.

Mary Mallon, better known as Typhoid Mary, was the first person in the United States identified as a carrier typhoid fever. She was presumed to have infected some 51 people, three of whom died, over her career as a cook. She was forcibly isolated twice by public health authorities and died after nearly three decades altogether in isolation.

Retrieved from "https://warehouse13.fandom.com/wiki/Mary_Mallon%27s_Butcher_Knife?oldid=45652"
Community content is available under CC-BY-SA unless otherwise noted.