A box crafted from leather which holds the artifact, a 'Kotik' tattoo featuring a cat's head motif. The leather is theorized to be the skin of Ignaty Gryniewietsky/Ignacy Hryniewiecki.

The tattoo is capable of moving across its host's skin to avoid being manipulated or removed by force, and can transfer to others through direct skin contact. Over time, the tattoo causes heat and radiation build-up, leading to a large and violent explosion. 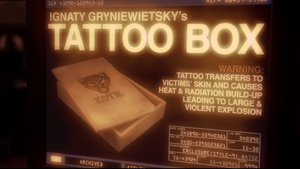 Applying the blank box, being made of human skin, to the tattoo will transfer it back, negating its effects and allowing it to be neutralized.

Originally in the Warehouse, but Artie (under the influence of the Astrolabe) sent it to Pete Lattimer's ex-wife in an attempt to distract him. It was neutralized and re-collected by Pete.

Ignaty Gryniewietsky was a member of the People's Will, a radical Russian terrorist group, and was the assassin of Tsar Alexander ll. Prior to the assassination he wrote a letter that read:

"Alexander II must die. . . .He will die, and with him, we, his enemies, his executioners, shall die too. . . . How many more sacrifices will our unhappy country ask of its sons before it is liberated? . . . It is my lot to die young, I shall not see our victory, I shall not live one day, one hour in the bright season of our triumph, but I believe that with my death I shall do all that it is my duty to do, and no one in the world can demand more of me. . . ."

On 13 March 1881, Gryniewietsky, and a few other members of the People's Will, began their assassination of Alexander ll. The bomb set off didn't kill Alexander ll, but as he was leaving the scene Gryniewietsky came running towards him, screaming, "It is too soon to thank God yet, Alexander Nikolaevich" and before anyone could stop him the bomb he was holding exploded. Gryniewietsky survived the explosion, but he had successfully assassinated Alexander ll. Gryniewietsky was taken to a hospital, but he refused to disclose any information to the police about the assassination and died an hour and a half later.