Drinking from Godfrid's Spoon give the drinker strength, After so many uses the drinker can spontaneously combust.

Created by the Viking prince Godfrid Haraldsson (circa 820 - 852) who made it from the armor of fallen warriors. It was used to give strength to Godfrid's warriors in battle.

Anyone who drinks from it or any liquid it touches begins to show increased muscle strength. However, if a person uses the artifact too many times then eventually their muscles will catch fire and they'll be burned alive. The more a person takes in, the sooner they die. 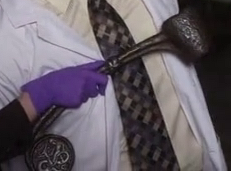 This artifact was first discovered after a college wrestling team went from being losers to being unstoppable overnight. Also, one of team's members died in a fire while he was camping; strangely it appears the fire started from inside his sleeping bag. It was later found out that the wrestling team members were acting as test subjects for a new line of energy drinks. The doctor in charge of research at the bottling plant was using the artifact as a kind of steroid for the drink.