Glass Jar from the Donner Party

Putting money in the jar

A simple glass mason jar, with the addition of a "Tips! Gracias (Thanks)" label added on. Currently shattered into pieces, it is kept in the Warehouse.

In 1846, the Donner party began their migration from the Midwest of America to the state of California via the Oregon trail. Along the way they lost most of their wagons and cattle due to mishaps, river crossings, and dangerous terrain, but the worst was yet to come.

The ill-fated party, after taking a different route called the Hastings Cutoff, then became trapped high in the Sierra Nevada mountains by heavy snowfall where they were stuck for almost four months. By the time they were rescued, 39 of the 87-member party had died of various causes such as starvation or sickness, and they had lost all but three mules and most of their possessions. Their despair, starvation, and the sheer harshness of the conditions likely imbued this jar with its properties.

In the olden days, people would put money in glass jars like this and bury them in a place that could be found later. This was one of the jars that the Donner Party used a kind of time capsule.

When people place items (mainly money) into the jar, they develop increasingly severe symptoms of hypothermia followed by extreme carnivorous cravings and sensitivity to light. As Artie put it:

This artifact is not only a danger to its user(s), but also to other people. The affects of this artifact can make the victim so hungry that they will try to eat anything, even a best friend.

The owner of a taco vendor's truck, named Manny, found the jar buried in the dirt while hiking and he took it home with him as a souvenir. Not suspecting of its nature as an artifact, he then decided to use it as a tip jar, putting a label on it for this purpose.

This artifact first came to the Warehouse's attention after two teenagers in Ithaca, New York were attacked by some kind of animal while alone in the woods at night, the strange part being that after going to the hospital the doctor realized that it wasn't an animal that had attacked them, but another person had tried to literally take a bite out of them.

Pete being Pete, he initially expected it to be some kind of literal zombie outbreak, but this was disproven when the supposed "spread" of the symptoms was not transmitted by bite.

Pete and Myka discovered that the artifact was a glass jar imbued with all the pain and suffering of the Donner party. They then found the common thread: Manny's Tacos. All the people that were affected by this artifact were people that had recently ate from Manny's truck and all had given him a tip. Much to the agents' horror, Myka had also eaten here and put a tip in the jar, along with four construction workers. Manny told Pete how he had found the jar in the wilderness. Pete destroyed the artifact in order not to get eaten by Myka and the workers, who had all become affected by second stage symptoms. The pieces are currently in the Warehouse.

The Donner Party was a group of 87 American pioneers who were trapped in the Sierra Nevada mountains in 1846 by a snowstorm. 39 of them died from starvation, hypothermia, disease, trauma, and possibly even cannibalism, while the rest suffered through brutal conditions and great misfortune. 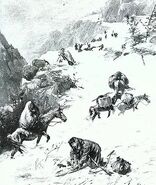 Add a photo to this gallery

Retrieved from "https://warehouse13.fandom.com/wiki/Glass_Jar_from_the_Donner_Party?oldid=48249"
Community content is available under CC-BY-SA unless otherwise noted.