For other articles with related titles, see Claudia (disambig).

Able to sense the birth and presence of artifacts 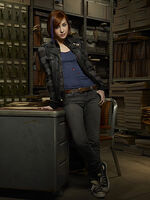 Claudia Donovan was born August 13th, 18th, or 20th,[1] 1991[2]. For the first portion of her life, Claudia was raised in a family consisting of her mother, father, brother Joshua, sister Claire, and herself in the fictional town of Kenswick, Minnesota[3]. When she was still young, she and Claire attended a yard sale where Claire stumbled across an antique music box. Claudia, even at such a young age, was able to recognize the power of the music box as an artifact, and begged her sister not to purchase it. Claire refused to heed her words and inadvertently tapped into the artifact power of Frances Farmer's Music Box, giving her the power of telekinetic outburst during periods of intense negative emotion. The ultimate result of Claire's powers was the accidental death of their parents at Claire's hands, and the removal of Claire into a Regent facility where she was held in an artifact-induced coma.

Claudia was fed the story that her parents and Claire had perished in a fatal car accident, a bending of the truth as Claire had crushed their parents against a tree while inside their car. As such, Claudia believed her only remaining family was her brother Joshua, who gained custody of Claudia after their parents death and raised Claudia while attending university. During this time, she was a Girl Scout, and Joshua helped sew on her patches. He also red Maria Looney on the Red Planet to her every night[4].

It was while Joshua was at university that Claudia was introduced to Artie Nielsen and Professor Reynolds, aka James MacPherson. As a result of Joshua's friendship with Artie, he was convinced that he could perform a successful experiment with teleportation using Rheticus's Compass. Claudia watched as Joshua began the experiment, only for it to go wrong, and for her brother to disappear before her eyes, leaving her to believe he had died and left her an orphan.

With no family left, Claudia entered into the foster care system. She implies she had at least one physically abusive foster father during this period, and so ran away to spend three months on the streets in Minneapolis during the winter[5]. Years later, between June and August of 2008[4], she began to experience visions of her brother attempting to communicate with her. Believing that the magnitude of her grief was possibly causing mental instabilities, she checked herself into the Mellinger Psychiatric Clinic[6]. Her experiences there were, by all accounts, not pleasant, and possibly physically torturous[7]; she also described the psych ward as colder than the streets of Minneapolis in winter[5]. After four months of treatment, she realized that Joshua was, in fact, trying to contact her from the kind of limbo the experiment had placed him prisoner in, and was not dead as she had previously believed; she subsequently checked herself out of the hospital between December of 2008 and January of 2009.[4]

With nothing else to go on but her memories of Joshua's work with the experiment and his friendship with Artie that led to his disappearance, Claudia began to research how to recreate the conditions that Joshua used in his experiment and eventually connected Joshua's entrapment with Artie, resolving to track him down in order to demand or force his help in retrieving Joshua.

Tracking Artie required Claudia to follow the various energy pathways on the American power grid, ultimately zeroing in on the location of Warehouse 13 in South Dakota. Once discovered, Claudia was able to hack through the Warehouse's security systems and send a simple message to Artie - KNOCK KNOCK.

With the Warehouse's location known, and its security systems compromised, Claudia was able to apprehend Artie, keeping him hostage with the use of Supercharged Handcuffs of her own design.

She then took Artie to the site of her brother's failed experiment and forced him to help her recreate the conditions that led to Josh's disappearance. When Artie realized that Claudia was, in fact, not insane, he willingly helped in her rescue attempt, using Ben Franklin's Lightning Rod to boost the power of Josh's equipment. Claudia and Artie managed to enter the inter-dimensional limbo where Josh was trapped, completing the instructions engraved on Rheticus' Compass in order to bring them all back to the corporeal realm.

Upon Artie's return to the Warehouse, Mrs. Frederic knew Claudia knew too much about the Warehouse, about artifacts, and about him, so she gave him two options with regard to Claudia: hire her, or "deal with" her. Given Claudia's technological aptitude and ingenuity, Artie opted to offer her a job at the Warehouse, which she readily accepted. Partially, Artie hired her because he knew she had nowhere else to go. She had spent the last 12 years trying to get her brother back and now that he was back she had nothing. Joshua wanted to pick up where he left off in his life and see what had happened in the last 12 years. Claudia had no other family or friends or careers, so she was alone. However, now Leena, Pete, Myka, Artie, and the entire Warehouse is her family.

Most of her initial work involved a record-keeping filing, and taking inventory, which she found to be a mind-numbingly tedious waste of her skills. Bored with her assigned tasks, she took up personal side projects, including re-purposing a Spectroscope into a 3D hologram imager. Also, she has been tinkering in the Farnsworth aisle and has been creating her own new artifacts like the Tesla Grenade (first used in Season 3) and the Mini-Tesla. However at the end of Season 3, she also makes and uses a Tesla Rifle. She also got told off by Artie for meddling with the Farnsworths.

Claudia is neither a Special Agent, nor a Criminal Research Specialist, because she does not yet meet the USA's minimum age requirement of 21-years old. She is however, as of season 3, a fully active Warehouse agent and often partnered with Steve Jinks, "The new guy".

During the events of Warehouse 2's reactivation, Mrs Frederic & Dr.Vanessa explained to Claudia that everyone at the Warehouse had a purpose, and that she had to be prepared. It was later revealed to Claudia that her purpose was to be a backup "Caretaker" for Warehouse 13 in the event that Mrs Frederic was killed, it was also implied that one day she may be Mrs Frederic's successor. Claudia began to undertake the procedure to become the Warehouse Caretaker before Agents Bering and Lattimer managed to deactivate Warehouse 2. Claudia made Artie promise her never to put her in that position - to have something done to her against her will, again.

It has been shown in Season 4, that Claudia is still a potential successor to Mrs. Frederic. She has the ability to sense the birth of an artifact and has been made aware that while she can have a family, she may outlive them. In the episode "Instinct", Claudia admits that she wants to become the new caretaker of the warehouse, and was worried that if the Regents didn't approve of her, she wouldn't get the chance. However, at the end of the episode, she thought she smelled apples, a sign that Cataraunga said was the Warehouse approving an agent.

In "The Truth Hurts" Paracelsus becomes Caretaker of Warehouse 13 and while everyone else is fleeing from him Claudia says she wants to stay and fight as she believes the Warehouse will protect her. However, in "Endless Terror", while the Warehouse does protect Claudia from Paracelsus' attacks, Paracelsus has complete control over Claudia's body as Claudia is part of the Warehouse and Paracelsus controlled the Warehouse.

In "Secret Services", Artie tells Claudia the truth of how her sister, Claire, is still alive. With aid from the Bronze Baby Shoes, Artie shows how when Claudia was a child her sister Claire purchased Frances Farmer's Music Box from a yard sale and how this artifact led Claire to kill their parents. The Music Box causes its user to have telekinetic outbursts when they get mad, during one of these outburst Claire smashed their family car against a tree with their parents inside. Artie was after the Music Box at the time, but he wasn't able to neutralize it before Claire killed her and Claudia's parents. Also, Claire threw the music box into a fire place so it could never be neutralized and its' effects would stay with her forever. Artie tried many ways to cure Claire of the Music Box's effects including anti-psychotic drugs and several artifacts, but nothing worked so it was decided that Claire will remain in an artifact induced coma and remain inside the Warehouse until a cure can be found. After learning this, Claudia swore she'd find a way to cure Claire.

In "A Faire to Remember", Claudia attempted to cure Claire herself, using Bob Dylan's Bus Transfer Ticket to transfer the energy of Frances Farmer's Music Box from Claire to Alessandro Volta's Biscuit Bin. However, Artie had already tried this years earlier, but it didn't work then as the Music Box's energy needs a living host to inhabit. The energy was instead accidentally transferred to Myka and she began suffering the effects of the Music Box. Claire chose to reabsorb the Music Box's energy and go back into a coma as she wouldn't want anyone to take her place.

Sometime during or after 2013 (presumably within a decade), Claudia succeeded Mrs. Frederic as Warehouse Caretaker, and is the only remaining member of the main group by 2063[8]. Like her predecessor, she is known by her subordinates simply as "Ms. Donovan".

When agent Adam Maddox expresses doubts about being a Warehouse agent, she bestows advice given to her by Artie five decades ago: that it's not a crime to change his mind, that he doesn't have to commit to the rest of his life in a day, and that to be happy, one must be a little selfish. She implies that by this time the Warehouse has "almost moved" many times, but has remained because it sometimes "takes a liking to people."

Reminded of her former family by these new agents, she returns to the Round Table where they submitted their defining moments so long ago and uses it to hear their voices once again.

Claudia is very headstrong and determined, and to others comes across as a "brat" at times, due to the fact she never lets up until she gets her way. She is also a curious, borderline intrusive individual, but her quirky and impulsive nature (at times like Pete Lattimer) leads her to have high initiative. She also loves to play with the various gadgets at the Warehouse to occupy herself.

Claudia is very sarcastic and dry, particularly towards Artie, and has no problem being irreverent towards him, despite the fact he is her boss. She also enjoys music, being able to play the Guitar and sing.

During Season 2, she is shown to doubt herself as an agent, such as when she accompanies Myka Bering on her first mission in "For The Team", and admits she doesn't feel she's good with people, and should probably "Stick with the computer stuff." She also seems to be self-conscious about her personality, shown in "Age Before Beauty" when she goes on a date with Todd, and feels she's a "train wreck". However, she becomes more confident with herself as the series progresses and spends more time in the field.

After the traumatic events of Season 3, she shows the darker side of her personality with the same anger and determination and a particular hatred for those she deems responsible (namely The Regents and Marcus Diamond) that she showed in the episode "Claudia" in Season 1.

Sophi Knight played the childhood-age Claudia Donovan in the episode "Claudia". The recurring late-teens character is played by Allison Scagliotti.