The Aztec Bloodstone is a 15th century (CE) artifact that exhibits the ability to control individuals whose blood comes in contact with the stone.

The bloodstone is a grayish-black rock carved into the shape of a human head covered in stylized carvings. When activated, the stone bleeds from the top of it's skull. The bloodstone is inlaid with white stone eyes with carved swirls for irises, and large pink tear-ducts on the outer corners. Immediately between the eyes is a small square bloodstone. It has teeth made of crystals of different sizes, and the inside of the head is hollow enough for items to be placed or dropped inside it. After being deactivated by the headdress key-stone, the stone mouth completely closes. 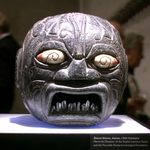 This item was on display at the Capitol Museum of Natural history in Washington DC where the United States President and honored dignitaries would be visiting. When on display in the museum, the stone's plinth was labeled:

Before the stone was placed on display, Professor Gordon Letanik, an expert at the museum, was assigned to clean it. He accidentally activated the bloodstone when he used his bare hand to retrieve a tool that had been dropped inside and subsequently cut his finger on one of the jagged crystalline teeth that lined the open mouth. The blood from his cut finger appeared to activate the bloodstone. Once activated, the bloodstone appeared to influence Professor Letanik in such a way that he attempted to attack the daughter of the Mexican Ambassador to the United States. This attack was instead interpreted as an attack on the President of the United States.

Warehouse Agent Arthur Nielson successfully retrieved this stone by inserting what resembled a large, flat key into the top of the head that had been doused in neutraliser. Once inserted, the key gave the entire head the appearance of a Meso-American headdress and the mouth appeared to be closed, with no teeth visible.

As the key was inserted, a strong yellow light emanated from the head and mouth of the bloodstone, triggering screaming from Professor Letanik who was, at the time, being apprehended by Agent Myka Bering for his apparent attack on the president.

Once retrieved, the bloodstone was brought back to the Warehouse and although originally stored in the main storage area, it was eventually moved to the Dark Vault.

This stone was most likely used in ancient Aztec ceremonial rituals. Based on Gordon Letanik's actions, the bloodstone appears to be activated when someone cuts themselves on the teeth inside the mouth. After their blood "feeds" the stone, the head itself drips blood of unknown origin. The person who is cut continues to bleed from their cut despite any bandaging. They are also taken over by feverish chills and a type of controlled frenzy that encourages murderous behavior.

Their eyes appear bloodshot and glassy, as if they are not in control of their own actions. Given Professor Letanik's attack on the Mexican Ambassador's young daughter, the stone encourages people under its influence to seek out virgin blood for further sacrifice. If the stone is de-activated, all the blood that had dripped off the stone disappears and the stone's victim is free of its influence, but slips into a coma.

The bloodstone may be a bifurcated object based on the flat key "headdress" Artie inserted in the stone head to halt the effects of the blood frenzy. Even when the stone is placated by its headdress (which closes the mouth) victims under the stone's effects will be rendered comatose, though how long this effect lasts on the victims is never stated.

Heliotrope, also known as bloodstone, is a mineral aggregate made of jasper and hematite. The red hematite is said to resemble spots of blood. In many cultures, bloodstone was associated with bloodflow and used in medicine for it's coagulant effect. In the Aztec Bloodstone artifact, a piece of bloodstone is inlaid between the eyes of a stone skull, perhaps in reference to the tzompantli, or "skull racks" most famously found in the ancient Aztec city of Tenochtitlan, sometimes represented with carved stone skulls. The ancient Aztecs predominantly practised human sacrifice as gifts to the gods, afterwards putting the victim's bloody head on display on the tzompantli. Ritualistic bloodletting was also an important part of Mesoamerican culture.

Retrieved from "https://warehouse13.fandom.com/wiki/Aztec_Bloodstone?oldid=46509"
Community content is available under CC-BY-SA unless otherwise noted.