Warehouse 13 Wiki
Register
Don't have an account?
Sign In
Advertisement
in: Pages with reference errors, Federal Agents, Characters,
and 4 more

Dr. Arthur "Artie" Nielsen, born Arthur Weisfelt, runs Warehouse 13. He serves as its custodian and has been there longer than any other current Warehouse agent.[1]

He was born Arthur Weisfelt on July 2, 1948[2] and grew up in Philadelphia, Pennsylvania. He has Russian Jewish heritage. His father, Izzy Weisfelt, taught musical composition at Temple University. The young Artie is a gifted pianist and earns admission to the Julliard School. Rather than continuing his musical training, he goes to work for the National Security Agency (NSA). He is fluent in Russian,[3] German, French,[4] has an understanding of Hebrew[5] and Yiddish, and can also read Latin,[6] Spanish,[7] and Egyptian Hieroglyphics.[8][9] Before working for the Warehouse, he would hunt down and trade artifacts that he found in exchange for getting family members out of East Berlin. He only traded items he didn't think had any value to people there.[1]

Artie was a cryptographer for the National Security Agency when he was in his 20's. He decoded Soviet communications, and intercepted letters and phone transcripts for them. The NSA felt that he turned because he contacted one of the people they were spying on and started selling secrets to the Soviets. However, Artie wasn't really selling government secrets to the Soviets, he was actually selling artifacts to them thinking they were just rare antiques. One day, Artie's Soviet contact accidentally let it slip that these antiques Artie was trading them had mysterious powers. Artie soon realized that many of these items the Soviets wanted were dangerous and could cause much pain and death. Artie was so overwhelmed with guilt for what he did, he turned him self into the NSA.

He was going to be prosecuted for treason, but Mrs. Frederic approached him that day and offered him a chance to make amends for his mistakes. Artie claimed he changed his name, so the Soviet government wouldn't be able to find him easily, not because he was trying to hide from the United States government.[10] As Artie Nielsen, he then joined the Secret Service, and later was drafted into service at The Warehouse. 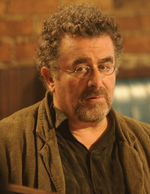 Artie has dedicated the last 35 years of his life to work at The Warehouse.[11] Mrs. Frederic believes that Artie is the best agent the Warehouse has ever had.[11] In his time at the Warehouse he has had a higher artifact retrieval rate than any other agent.

Artie was recruited to the Warehouse sometime in the 1970s; In "Implosion", a document states that an arrest for then-Arthur Weisfelt's arrest was made November 1978,[12] indicating he was excused and recruited by Mrs. Frederic at some point afterwards. In "13.1" however, Artie speaks of Hugo's time at and forced retirement from the Warehouse by 1974-75 as if he were there, and Hugo recognizes Artie as a fellow agent. This is later corroborated in "Love Sick" where it is implied Hugo, Vanessa, and by extension Artie were all agents together at once.

Early in his Warehouse career, Artie was partnered with James MacPherson. At some point during that partnership, he formed a relationship with Carol, with whom James also had a relationship. James disappeared during their partnership and to this day, Carol blames Artie for the disappearance, claiming he was responsible for it. Artie insists she simply chose poorly by choosing James instead of him.[10]

As the senior agent or veteran at Warehouse 13, it's part of his job to train new agents and run things at the Warehouse; he is considered to be the "boss" at The Warehouse

In Artie's file, it says he has an unconventional training method. 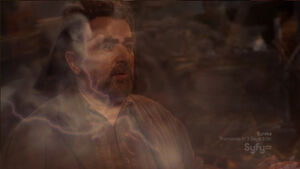 At some point in his career before or in 1997, Artie posed as a professor in order to get close to graduate student Joshua Donovan, to help him while he attempted teleportation research using Rheticus' Compass. It was Artie's mission to retrieve the compass. Unfortunately, Artie watched helplessly with Joshua's younger sister, Claudia Donovan, as Joshua disappeared, apparently being killed in an experiment with the compass. Only later was it discovered that Joshua had trapped himself in an inter-dimensional space. This incident caused Artie much grief because he had pushed Joshua to continue the experiment and promised Claudia that he would do whatever he could to help keep him safe.

During his career, his old partner, James MacPherson blew up the Umbilicus with Artie still inside, thus killing him. Thankfully though, due to the Phoenix, he was reborn from his ashes, ashes which Pete had the misfortune of choking on. Later on, after MacPherson was killed by Helena Wells, Artie's mind had conjured up MacPherson as a result of Artie not being completely "finished" with their parting. He had gone to James former room (now sealed in the Warehouse) and had found a testament written by James and a pocket watch that he and James had argued about in the past.

Later in his career, he had multiple assignments with Claudia, as she was an apprentice under him. Both Artie and Claudia had dealings involving Philo Farnsworth's Three Dimensional Projector, Man Ray's Camera, Max Wertheimer's Zoetrope, and Mata Hari's Stockings.

Artie tends towards secrecy. He withholds information about himself and tends to give just enough information to agents for the mission at hand, without answering many of their questions. He obsesses about minutiae to the point of neurosis, and has been known in the past to leap to conclusions based on precious little evidence beyond "gut" instinct.[13] Artie prefers old-fashioned items and ways of doing things because they are familiar and comfortable, not necessarily because he likes them better.[10] Artie frequently tries to protect the people with whom he's forged relationships, either by making them promises to do so (whether or not he can keep them)[14] or by swearing to potential attackers that he won't allow harm to come to those about whom he cares.[10]

While not noticeably a religious man, Artie has studied the Talmud enough to at least be able to quote it.[10] Artie plays the piano.[15]

Artie is apparently also adverse to normal technology, he reluctantly allowed a "hack from Global Dynamics" to come to Warehouse 13 and upgrade the ancient computer systems at the request of Claudia. Claudia described to Douglas Fargo that Artie would have "vetoed fire if he'd been born a few years earlier".

It was later shown in the series that Artie had a crush on Dr. Vanessa Calder, as noticed by Pete when he was "recovering" from the Telegraph artifact in his previous mission.

He likes to think of the Warehouse as "America's attic", and describes his job as being the "gatherer and protector of secrets". He also says that what you have to do when you're on a mission is to "snag it, bag it, and tag it".

In The Living and the Dead Claudia and Steve ventured into Artie's mind, and discovered that his mind manifests itself as an extension of the Warehouse, and that he has established a number of defenses to prevent entry into the deepest parts of his mind. These defenses take the form of Dr. Vanessa Calder, Irene Frederic and James MacPherson respectively.

With the help of "... things," Artie is able to reproduce items, such as a sword, in short periods of time.[16] He likely uses artifacts.

Artie has also stated that he also knows how to contact David Bowie, how is unknown.

He is frequently seen snacking on milk and cookies.

Saul Rubinek also played a scientist in the show Eureka, Carl Carlson, both of whom love their job and have said something along the lines of their work is their life and without it they are nothing.