Wear the lab coat and goggles

Italian physicist Alessandro Volta discovered that his lab coat had acquired magnetic properties, after which it was obtained by the Warehouse because Volta could no longer control its effects. The more it was worn, the more magnetic it became, until it finally became a danger to everyone around it. It was acquired by Warehouse agents on March 23rd, 1969. The electronic label next to the coat reads: 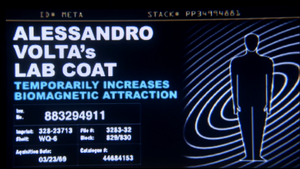 Claudia Donovan has used this artifact to climb the girders in the Warehouse to tighten Shelby bulbs in the ceiling. Unaware of the increasing magnetic danger, she found herself trapped on the girders, and needed rescuing by Artie. He safely demagnetized the jacket, before it could attract every metal object in the Warehouse and collapse the girders around them, killing them both.

How It Works[edit | edit source]

Volta's lab coat is a multi-part artifact that includes a coat with mitten hand extensions and a set of protective goggles. In order to operate, the goggles must be firmly in place on the face while the lab coat is on and buttoned or the magnetism doesn't work. Once in place, the lab coat magnetizes, allowing the wearer to "stick" to metal objects.

The level of magentism slowly increases and attracts small metal objects such as paperclips and bolts. The lab coat continues to increase its magnetic effects, gradually attracting larger and larger objects.

Retrieved from "https://warehouse13.fandom.com/wiki/Alessandro_Volta%27s_Lab_Coat?oldid=45558"
Community content is available under CC-BY-SA unless otherwise noted.